By Wicab, Inc. () it is being developed the device that by which blind people may "see" the outworld by the tongue.


The unique technology was invented by Dr. Paul Bach-y-Rita in 1998 [analyticalarticle of Kenneth S. Suslick]. The technology allows transferring images from digital camera to the electrode array that sits upon tongue and stimulates its receptors. 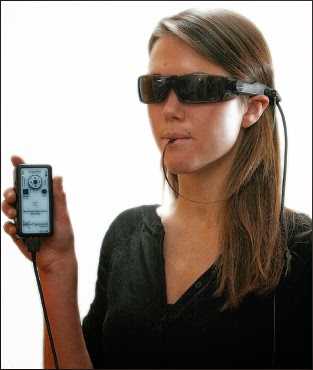 More details about the device.
Visual system BrainPort developed by Wicab, Inc. [company'sweb] works in the following way: video comes from the camera attached to the forehead to the processor that controls zoom, brightness and other parameters of the image. Processor also converts the digital signals into electrical impulses and actually takes over the function of the retina.

Electrode array of 3x3 cm is comprised of more than 600 electrodes, each of which corresponds to several pixels in the camera. Light intensity directly affects the strength and duration of the current electrical signals which the tongue feels. Electrode array provides spatial orientation due to the flash in the center of the visual field is displayed in the form of a pulse in the middle of the array. White dots are transmitted by high electrical signal and black ones by the absence of voltage. Nerve endings dotting the tongue perceive these pulses. The volunteers have the feeling of champagne bubbles. It is still unclear where the data go further: to a visual or somatosensory cortex [material is taken from http://www.membrana.ru/particle/1131]. 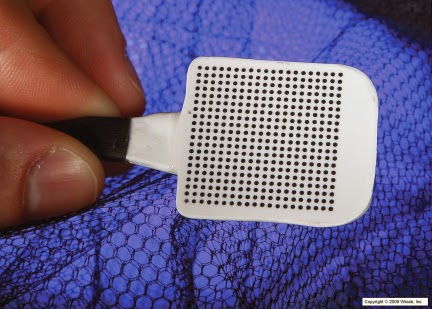 The device provides blind people by monochrome vision, the ability to see not just spots, but objects. Sightless have the possibility to make their usual actions: pour coffee, press the elevator button, read what is written on the wall. 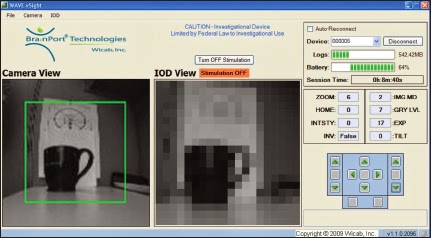 About the development of the invention.
Dr. Paul Bach-y-Rita (1934-2006) started to conduct experiments with visual perception through tactile contact in the late 1960s. Initially he developed so-called tactile vision substitution systems capable to deliver visual information to the brain through the stimulants that are in contact with skin of one of several parts of the body (abdomen, back, thigh, fingertips). After sufficient trainings, blind people could feel the image in space rather than on the skin. Nevertheless, the success of the results was limited by inconvenience of practical application of the devices. Mechanical vibrotactile system were bulky and consumed a lot of energy, and  electrotactile systems required high voltages, especially in the areas of the fingertips due to the thick protective layer between the external environment and skin sensory receptors.

The tongue is very sensitive and mobile, and since it is in the protected area of the mouth, sensory receptors are close to the surface. Furthermore, saliva perfectly conducts electrical impulses. That is why Dr. Paul Bach-y-Rita conducted an experiment with tongue receptors [Scientist’s article] and demonstrated that tongue requires only 3% (5-15 V) of the voltage and much less current (0.4-2.0 mA), compared to the fingertips.

Watch the video from BBC:

Erik Weihenmayer: the blind rock climber who sees with his tongue 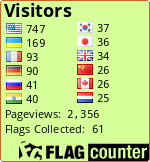