Sourse of the picture

I have found very exciting article of Dr. Dobelle “Artificial Vision for the Blind by Connecting a Television Camera to the Visual Cortex”. The article was published in 2000, so I would like to notice that many of the characteristics of the visual implant described below could be improved since that time. Personally I was impressed by the fact that the first cerebral implants aimed to stimulate the visual cortex were set up as early as in the 70s.

Dr. Dobelle along with more than 300 other scientists, physicians, engineers and surgeons have been developed cortical visual implant, which unlike some other artificial vision proposals (e.g. retinal stimulators) is applicable to virtually all causes of blindness. Particularly, the presence of the eyeballs is not necessary in this case.

The research group have also provided a battery powered, electronic interface which can replace the camera, permitting the sightless volunteer to directly watch television and use a computer, including access to the Internet. 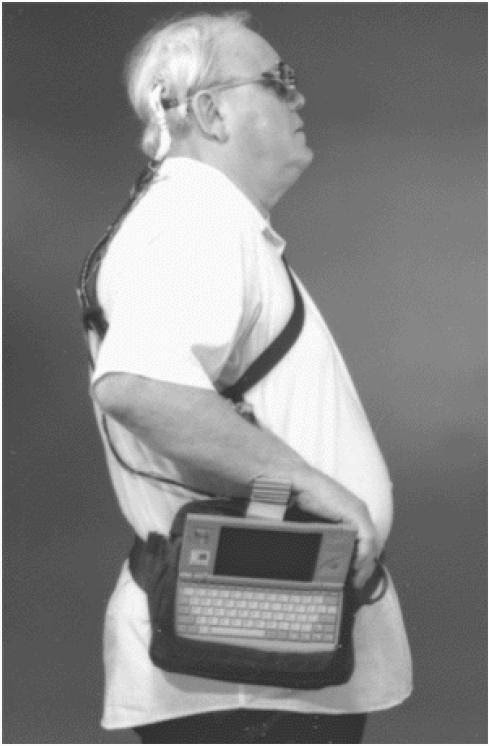 The complete artificial vision system showing the computer and electronics package on the belt with output cable to the electrodes on the brain.

According to the author, the push for his research was made by a seminal paper published by Giles Brindley’s group in 1968. Their first human experiments in 1970-1972 involved cortical stimulation of 37 sighted volunteers who were undergoing surgery on their occipital lobe under local anesthesia to remove tumors and other lesions. In 1972-1973 they then stimulated the visual cortex of three blind volunteers who were temporarily implanted for a few days with electrode arrays.
Their subsequent experiments have involved four blind volunteers implanted with permanent electrode arrays using percutaneous connecting pedestals. Two volunteers were implanted in 1974. One array was removed 3 months after surgery as planned, and the second one after 14 years. The second volunteer agreed to continue participation but his implant was removed due to a blood borne infection that did not originate with the implant.  The first five volunteers were operated on at the of in . Two additional blind volunteers, including the subject of this article, were implanted in 1978 at the in . They have both retained their implants for more than 20 years without infection or other problems.

The Volunteer and Implant

Dr.Dobelle describes in details a 62 year old patient, who traumatically lost vision in one eye at age 22, and was totally blinded at age 36 by a second trauma. He was continually employed, before and after losing his sight, as an administrator by the State of . He retired in 1997 after 32 years of service. The electrode was implanted in 1978 when he was 41 years old. The implanted pedestal and intracranial electrode array were used to experimentally stimulate the visual cortex, on the mesial surface of the right occipital lobe, for more than 20 years.  However, the fifth generation external electronics package and software are entirely new, taking advantage of cutting edge technology that has only recently become available. An X-ray of the implanted visual cortex electrode array is shown in Figure below: 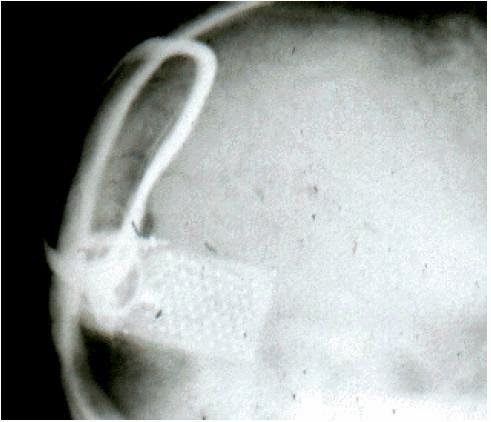 X-ray of electrode array on the mesial surface of the right occipital lobe.

The original surgery in 1978 was performed under local anesthesia, and implants in future patients can probably be performed on an outpatient basis by most neurosurgeons.

Phosphenes and Their Map in The Visual Field

The Dr.’s Dobelle visual prosthesis produces black and white display of visual cortex “phosphenes” analogous to the images projected on the light bulb arrays of some sports stadium scoreboards.
When stimulated, each electrode produces 1-4 closely spaced phosphenes.
Each phosphene in a cluster ranges up to the diameter of a pencil at arms length. The Dr.’s Dobelle work team determined that the phosphene map occupies an area roughly 8 inches in height and 3 inches wide, at arms length.

The 292 X 512 pixel charge coupled devices (CCD) black and white television camera is powered by a 9 V battery, and connects via a battery-powered National Television Standards Committee (NTSC) link to a sub-notebook computer in a belt pack. This f 14.5 camera, with a 69° field of view, uses a pinhole aperture, instead of a lens, to minimize size and weight. It also incorporates an electronic “iris” for automatic exposure control. The sub-notebook computer incorporates 233 MHz processor, 32 MB of RAM and a 4 GB hard disk. It also has an LCD screen and keyboard. The belt pack also contains a second microcontroller, and associated electronics to stimulate the brain. This stimulus generator is connected through a percutaneous pedestal to the electrodes implanted on the visual cortex. The computer and electronics package together are about the size of a dictionary and weigh approximately 10 pounds, including camera, cables, and rechargeable batteries. The battery pack for the computer will operate for approximately 3 hours and the battery pack for the other electronics will operate for approximately 6 hours. This general architecture, in which one computer interfaces with the camera and a second computer controls the stimulating electronics, has been used by Dr.’s Dobelle team in this, and four other substantially equivalent systems, since 1969. The software involves approximately 25,000 lines of code in addition to the sub-notebooks’ operating system. Most of the code is written in C++, while some is written in C. The second microcontroller is programmed in assembly language.
To control costs and ensure easy maintenance, the commercial off-the-shelf (COTS) components are used. The computer, stimulating electronics, and software are all external, facilitating upgrades and repairs.

Performance of the System
Тhe Dr’s Dobelle system provides low parafoveal tunnel vision. The picture captured by the patient is black and white with  plus field defects (due to gaps between phosphenes; there is no depth perception.

The patient learnes to use the system within 1 one-day sessions, and he continues to practice 3-4 hours per day 2 or 3 days per week. With scanning the patient can routinely recognize a 6 inch square “tumbling E” (see pic. [а]) at five feet, as well as Snellen letters [b], HOTV test [c], Landolt rings [d], and Lea figures [e] of similar size. These psychophysical tests are summarized in Figure below: 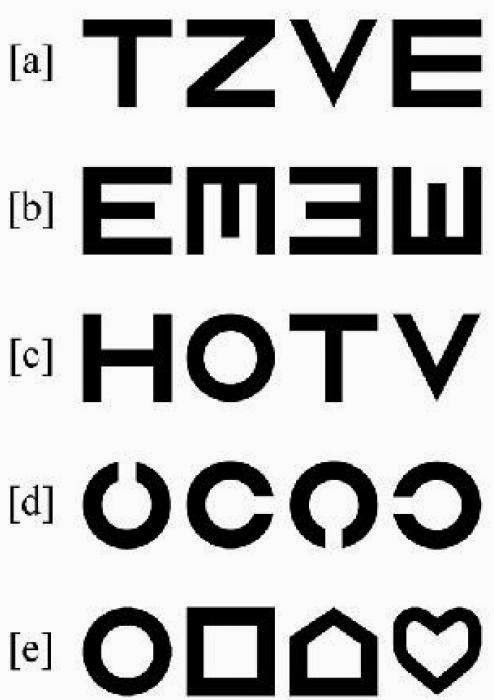 The patient can also count fingers. With the exception of finger counting, these acuity tests have been conducted using pure black characters on a pure white background at an illumination greater than 1,000 lux. The volunteer can recognize a 2-inch high letter at 5 feet. This represents acuity of roughly 20/400.

Paradoxically, larger characters are slightly more difficult for this volunteer because they extend well beyond the limits of his visual “tunnel”. The rapid fall-off with characters smaller than 20/1200 is also quite reproducible.
Similar acuity results have been achieved with the television/computer/Internet interface replacing the camera, although scanning is slower.

Although stimulation of visual cortex in sighted patients frequently produces colored phosphenes, the phosphenes reported by this volunteer (and all previous blind volunteers to the best of their knowledge) are colorless. Probably, this is the result of post-deprivation deterioration of the cells and/or senaphtic connections required for color vision. Consequently, color vision may never be possible in this volunteer or in future patients. However, optical filters could help differentiate colors, and it is also conceivable that chromatic sensations could be produced if future patients are implanted shortly after being blinded, before atrophy of the neural network responsible for color vision.

Contrast is entirely a function of the software, with adjustment by the experimental team depending on the experimental situation. The system also allows “reversal” in which the world looks much like a black and white photographic negative. Reversal is particularly useful when presenting black characters on a white background. These characters are then reversed by the computer so they appear as a matrix of white phosphenes on the patient’s (otherwise dark) visual field. The phosphene map is not congruent with the center of the volunteer’s visual field. Phosphenes also move with eye movement. However, the volunteer’s ability to fixate with this artificial vision system is a function of aiming the camera using neck muscles, rather than eye muscles. 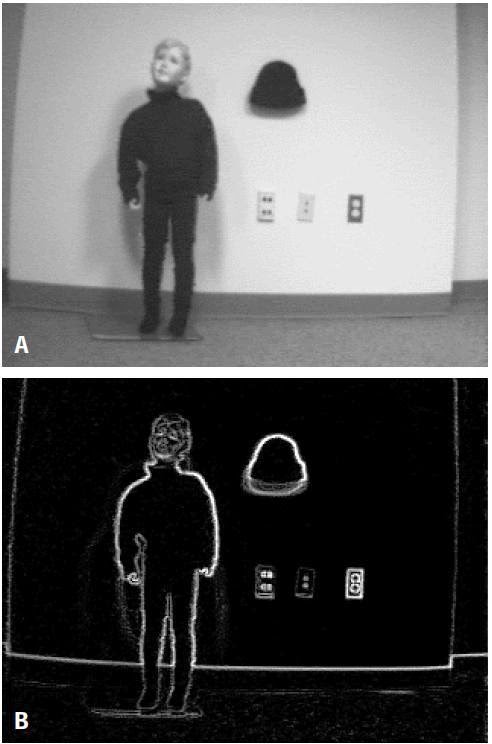 Picture of the 38 inch high child mannequin, with a second ski cap placed at a random location on the wall. B, Same scene as above, after edge-detection using Sobel filters and black/white reversal. The blind volunteer is able to easily find the cap and detect the wall outlets. Similarly, doorways appear as an outline of white phosphenes on a black background. All processing can be performed and transmitted to the patient at 8 frames/second.

While using edge detection, it is particularly helpful for the blind patient to know how far the wall is located behind the mannequin.
By placing an electrostatic transducer on the left lens of the patient’s eyeglasses (lateral to the camera and below the laser pointer) Dobelle’s team has begun exploring the supplementary information that can be provided by modulating brightness, blink rate and identity of selected phosphenes.

One final comment is that none of the seven blind volunteers of  Dr’s Dobelle study have ever exhibited epileptic symptoms or other systemic problems related to the implant. Based on clinical experience during the last 30 years, implanting thousands of patients in more than 40 countries with other types of neurostimulators (to control breathing, pain, and the urogenital system), Dobelle’s team believes that the principal risk of their artificial vision device is infection, which might require removal of the implant in addition to antibiotic therapy.
Posted by Helen Marka. at 06:35 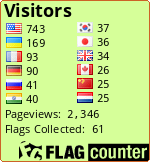